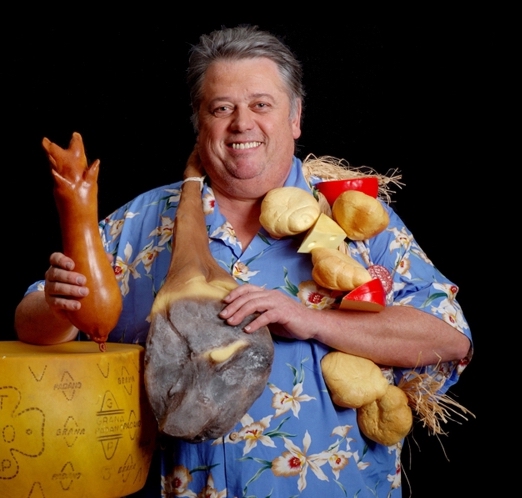 William Sweetlove is a post-modernist artist who mainly makes sculptures. In his work, the exciting relationship between the eternal and the temporary is exposed and deepened.

From a fascination with fossils, Sweetlove developed the urge to research memories and stories. He sees moments and memories as fossils in our heads. The discovery and commercialization of polyester inspires Sweetlove to lubricate all kinds of everyday objects and thus preserve them for the future. He makes art objects with bread, vegetables and fashion clothes, all things that symbolize transience. He also takes photos of himself and especially his grandmother who, like an actress, portrays all kinds of scenes that she does for the first time in her life. Afterwards the prints were smeared with resin plastic and buried in wooden boxes. Ten years later these were excavated by archaeologists.

Sweetlove sees plastics as eternal products that are created from fossil fuels. He therefore finds it important that art is made of it instead of disposable products. The plastic soup in the oceans and environmental issues in general thus become a core theme in his artistic argument. He makes images from (recycled) plastic with the main themes of cloning, water and food shortage. With shoes or boots on and a plastic bottle on the back, an army of dogs, penguins or elephants is ready to supply the world with drinking water. Not only plastic is for eternity, but he also uses the recycled bronze from the oil tankers that travel around the world, for example to make expensive handbags that carry vegetables: the real luxury products of the future.

William Sweetlove is internationally linked to the Cracking Art Group. A group of artists who set up large projects worldwide with plastic sculptures. Cracking Art refers to the cracking towers required to refine petroleum. Sweetlove and Stijn Coppejans have a collaboration that dates back to before 2010.